Welcome to the wonderful world of Newell! From here you can find out about the many bands Brad plays in at the present: Butter (funky rock), Workbook (Jazz), baddBop (fusion) and String Thing (Americana). Also included is info on his music teaching, recording and film scoring abilities. Enjoy!

Butter is a funkrock trio from N.C..We specialize in great songs, a great live show, and a group sound defined by a guitar/keyboard hybrid called The Gorgan. We recently won Relix Magazine's Jam-Off song contest which resulted in coverage in the Apr/May issue, as well as Blurt Magazine's Best Kept Secret. We're working on our first CD, and we're already getting airplay on several internet radio stations. Influences: Lee Micheals/Big Organ Trio/BlackKeys. Recent venues played: Deep South/Kraken/54 West/Southland/ Champions/Pinhook/Blind Tiger. Members of the band have either played with or shared the stage with such artists as Derek Trucks, Burning Spear, Charlie Hunter, Alex Chilton, Living Color, Cowboy Junkies, Adrian Belew (King Crimson) and many others.
Besides a full two sets of originals, we can also play a whole night of cover material, which is mostly made up of classic rock, funk and soul. Along with several instrumentals, we can adapt to any kind of club scene./ Brad Newell/Butter/jnewell1@nc.rr.com/butter music on Facebook. 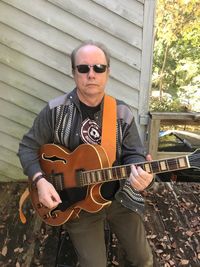 Come out Friday (1/07), and hear Brad and Larry play and sing their little hearts out! Oldies, newbies, Jazz, blues plus lots of other stuff played on guitar and congas. Fun!